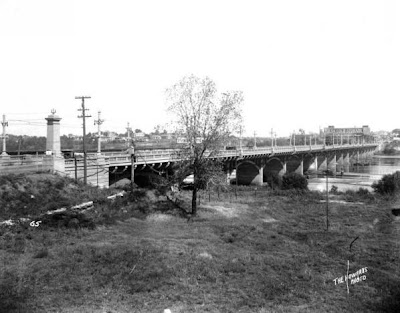 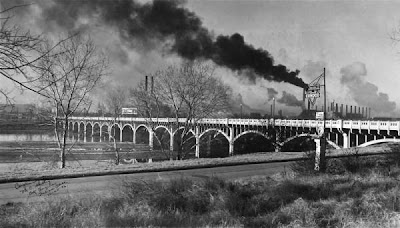 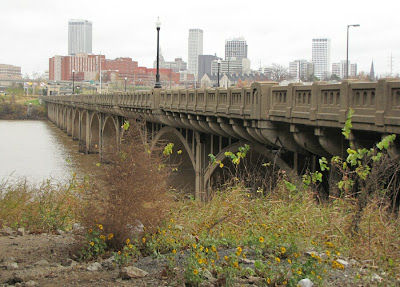 Tulsa's 11th Street Bridge over the Arkansas River is a good example of a multi-span concrete arch bridge with verticals. It is a continuous span constructed of reinforced concrete. The roadway decking and guardrails are monolithic. It was altered in 1929 and has ornate guardrails that utilize Art Deco motifs, especially the Zigzag Art Deco and PWA Classical-oriented Art Deco. Its roadbed is 34 feet wide and it was labor intensive to build, reflecting a technology and aesthetic approach to bridge construction no longer in use. 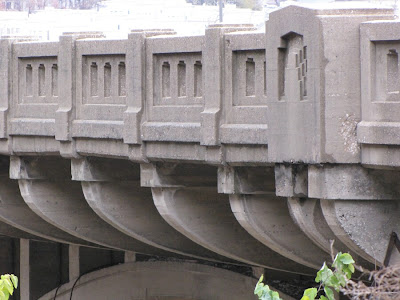 The current state of disrepair of the old bridge make it unsafe even for foot traffic. It has been named an historic site and plans exist to restore it and make it the centerpiece of a Route 66 Center. However because of the expense involved those plans are on hold for the time being.

This bridge is sandwiched in on the North by the Redfork Expressway (I244) and on the South by Southwest Boulevard. It it difficult to photograph except from either end looking between the old bridge and I244.
(Excerpted from Tulsa Preservation Committee. Older photo courtesy of the Beryl Ford Collection/Rotary Club of Tulsa, Tulsa City-County Library and Tulsa Historical Society.)
Posted by Unknown at 10:40 PM