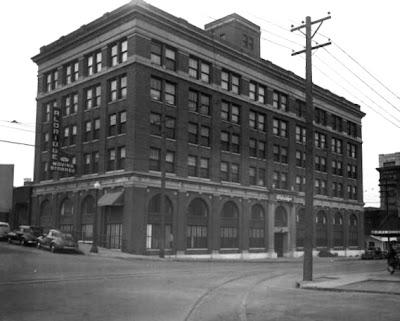 The Tribune Building, at 20 East Archer Street, was built in 1924 and housed Tulsa's evening newspaper the Tulsa Tribune until 1942. It was the first building in Oklahoma built as a newspaper plant. Built in Tulsa’s original business district, the Tribune Building is similar in style, scale, and materials to other 1920s buildings that were constructed several blocks to the south in what was to become the central business district. Designed as an efficient newspaper plant, its large, elaborately detailed interior also reflected the Tribune’s importance to the growing community.

In 1942 the Tulsa Tribune became part of the Newspaper Printing Company and was printed at 315 South Boulder along with the morning newspaper the Tulsa World. Following the trend of most evening newspapers the Tribune's subscribers declined causing it to be unprofitable and it ceased publication in September, 1992.

The Tribune Building subsequently served as a storage facility and as a mission for the homeless. The photograph above was taken in about 1945 when it was a warehouse for The Aldridge Moving and Storage company. Notice the streetcar rails turning the corner of Boston and Archer. 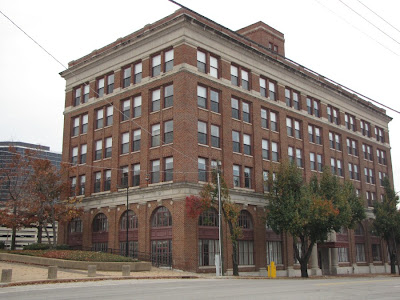 The building lay largely vacant from 1971 until 2001, when it was renovated and converted into loft apartments under the name Tribune Lofts. 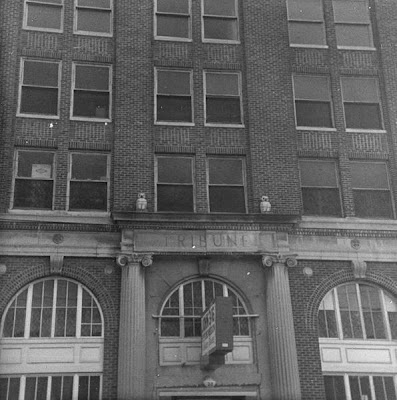 In the early sixties until its abandonment in 1971, the building housed John 3:16, a mission and shelter for homeless men. Notice that statues of two small owls originally sat perched above the entrance. The owl being a symbol of wisdom and appropriate for a newspaper. 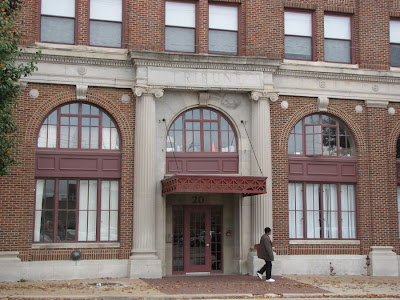 The main lobby retains its terrazzo floor, marble wainscoting and stairway, and dentiled molding. Original elevators, call buttons, and brass mailbox remain, as does the iron catwalk that surrounded second floor presses. The Tribune Building has become the cornerstone for revitalization of Tulsa's oldest commercial district.

(Excerpts are from Wikipedia and Tulsa Preservation Committee) (older photos courtesy of the Beryl Ford Collection/Rotary Club of Tulsa, Tulsa City-County Library and Tulsa Historical Society)
Posted by Unknown at 8:30 AM