The soaring modern design of this magnificant downtown Tulsa church can be seen from all directions. It is art deco influenced by gothic cathedrals. Construction began in 1927 and was completed in 1929. Click to enlarge and see detail.

The inside is very interesting too, but I don't have any photos inside. The only time I was inside was for a funeral and that was not a good time for taking pictures. I do remember that the organ was magnificent. As usual an excellent article about it can be found in Wikipedia. You can read it HERE. 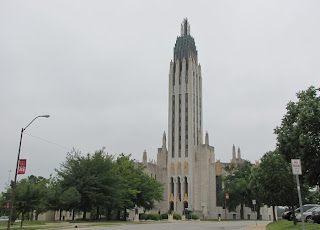 There are several versions of the story of how the distinctive architecture was created. Here is the version from the church's own web site.

Miss Adah Robinson, a University of Tulsa art instructor, was asked to sketch an initial design for the church. The sketch Robinson produced a few days later was a real shock to committee members, but her idea gradually caught on. The design was done in a new art deco style rather than the then-popular Gothic architecture, and included a round sanctuary and a slender 15-story tower. With the 1920's oil boom at its peak, church members were optimistic enough about the future to embrace both the new look and the $1,500,000 commitment. Robinson's design was approved, and Rush, Endacott, & Rush architectural firm was hired. A young man named Bruce Goff , one of Robinson's students and an employee of the firm, did the drafting and another former student, Robert Garrison, created the sculptures. Robinson supervised the project, working closely with church members and construction workers through the building's completion. Construction took over two years, and finally on June 9, 1929, church members moved into the twentieth-century art deco masterpiece that still houses the Boston Avenue congregation today