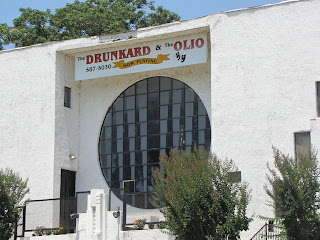 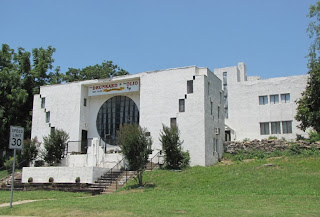 Built in 1929 as the Riverside Theater, since 1953 as the Spotlight Theater and home of The Drunkard melodrama and Olio of amateur talent. Link HERE

Patti Adams Shriner was a musician and teacher who received her training in the United States and Europe. She was also a scholarship pupil of the world renowned Maurice Moszkowski. Like her fellow artist (and designer of the Boston Avenue Church), Adah Robinson, Patti decided to build a residence to reflect her profession. The result was a combination studio and recital hall for her music students. Like Robinson, Patti selected Bruce Goff to be her architect. The Riverside Studio, as it was called, was built at 1381 Riverside Drive on a magnificent site overlooking the Arkansas River. The Art Deco structure is similar to the Robinson studio in both plan and material. The high ceiling lobby is reminiscent of the living room studio in the Robinson home. The stage acts as a link between the studio and residence, and the kitchen and dining facilities served both residential and studio functions.

The front elevation is dominated by an enormous round window patterned with sand-blasted designs. On each side of this window there are smaller rectangular windows connected by black glass inserts to form a diagonal pattern. It has been suggested that these windows resemble the black keys on a piano keyboard.

Eventually, Patti Adams Shriner was forced to give up her studio in 1933 and various lending institutions maintained possession until 1941 when Richard Mansfield Dickinson, a former New York City actor, purchased the property. He used the building as a residence and speech-drama studio. In 1953, Dickinson and a small group of performers known as the Tulsa Spotlighters, gave their first performance of a melodrama called "The Drunkard". Since that performance, the troup has performed the melodrama and Olio each Saturday night in what is now known as "The Spotlight Theater". The Drunkard and Olio has been a Tulsa fixture for quite a long time. In 1969 I was part of a Barbersop Quartet that sang on the Olio. We were the Sooner Statesmen.
Posted by Unknown at 9:00 AM