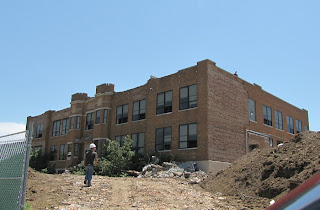 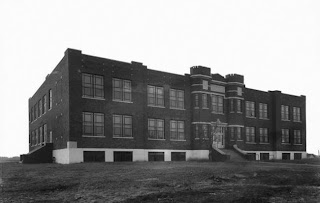 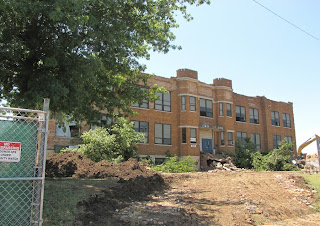 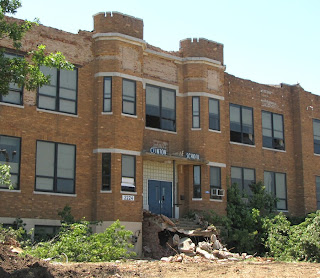 No doubt it is all for the best; still, it is sad to see an old friend go.
When the original cornerstone was opened a Time Capsule was discovered with papers and momentos from 75 years ago. Read about it HERE. 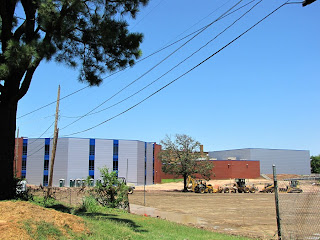 The new Clinton middle school being built adjacent to the original. View from the south. 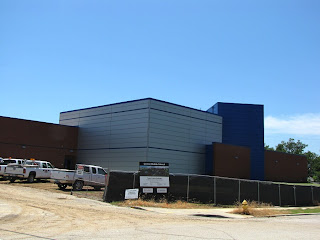 The new Clinton Middle School next to the old. View from the north.

Clinton was first built as a high school for the Red Fork District in 1925. When Daniel Webster High School opened in 1938 it became Clinton Junior High School, then later Clinton Middle School. I taught 7th and 8th grade mathematics and general science at Clinton in 1966 and 1967 and wanted to see what it looked like now. I arrived just in time to see some large machines tearing down the walls. I felt a little sad but then looked at the large new school being built to replace it.

That is what we do in this country, rather than try and preserve the old, we tear it down and build over. It will be a nice facility for the youngsters who attend school here. Perhaps in 75 or 80 years from now someone will see this new one torn down and be sorry to see it go.
Posted by Unknown at 7:55 PM