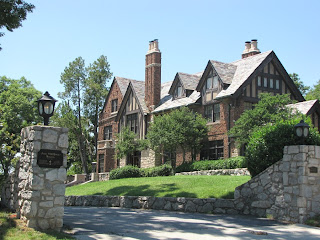 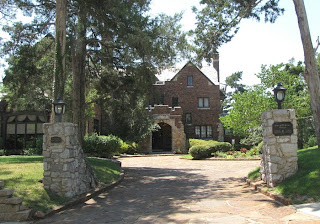 The McBirney Mansion is a brick, stone, and stucco house built by John Long of Kansas City in 1927-28. It is proportioned on a grand scale, befitting its Gothic Revival style, and is meticulously crafted. Landscaping features fine magnolias and cedars, a grotto, and a rock-lined walk that make effective use of the spring that gave the site its original importance.

McBirney Springs has its source in an underground stream that surfaces here near the Arkansas River. The site was used by pioneers and early residents of Indian Territory Tulsa for watering stock before crossing the river. A ferry replaced the ford at this point, serving travel between Tulsa and Red Fork until the advent of bridges. In 1832, Washington Irving stopped at this spring and was so impressed by its beauty that he wrote about it.

James H. McBirney and his brother formed the Bank of Commerce in Tulsa in 1904. He soon built two of Tulsa’s early skyscrapers: the 10-story McBirney office building and, adjacent to it, the first 8-story home for his bank. By 1918, he and two associates were developing the Childer’s Heights subdivision along the Arkansas River. Many of Tulsa’s first mansions were erected on the downtown’s perimeter by some of Tulsa’s early builders and developers. McBirney’s home is one of the last still standing. (Historical text courtesy of The Tulsa Preservation Commission)

The McBirney Mansion is currently operated as an upscale Bed and Breakfast and is available for special events. This would be a beautiful place for a wedding reception. Look Here.
Posted by Unknown at 8:12 PM