This house was designed by John Duncan Forsyth in a Streamline Art Deco style. It is a two-story, flat roofed house containing a massing of plain, unbroken surfaces in horizontal bands. A low concrete landscaping wall across the front of the property seems to extend, as an integral part of the house, from the garage and from the south wing. Painted white with teal blue detailing, the main block of the house rises like a ship’s deck from the landscape with one curved wall inset with a corner glass block window. The front projecting garage wall adjoins the recessed entry canopy. This strong horizontal feature is repeated on the second level by a cantilevered canopy over the deck. 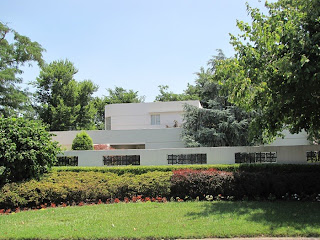 John Duncan Forsyth was born in 1886 in Florence, Italy. He received his training at Edinburgh College, Scotland, and at the Sorbonne, in Paris, France. He practiced in Tulsa and the surrounding areas from 1925 until his death in 1963.

Forsyth designed several homes in Tulsa including his own residence at 29th and Birmingham. In addition, he designed Southern Hills Country Club (1936 with D. McCormick) at the corner of 61st and Lewis, All Souls Unitarian Church (1957) at the corner of 30th and Peoria and Daniel Webster High School (1938 with W. Wolaver and R. Kerr) at 1919 West 40th. He is perhaps best known as the designer of the Marland Mansion in Ponca City (1926) and the Will Rogers Memorial in Claremore (1938).
Posted by Unknown at 9:20 PM