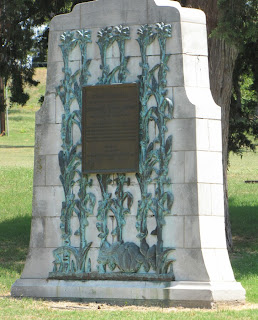 In 1935 the Daughters of the American Revolution erected a monument marking the intersection of tribal lands of the Cherokee, Creek, and Osage nations. Initially located at the intersection of West Edison and North Elwood, construction of the inner dispersal loop required this to be relocated to nearby Owen Park.

The inscription on this monument, reads:

On June 2, 1825, the Osage Nation, under treaty with
the United States, granted certain lands to the Government
for the use and benefit of the Cherokee and Creek tribes
who were being removed from the Southern States. This
monument is to commemorate that treaty and to mark that
spot where lands of the three great nations joined.
Posted by Unknown at 4:15 PM