Meadow Gold is Back 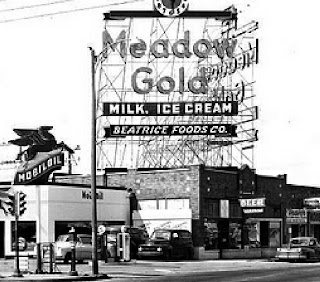 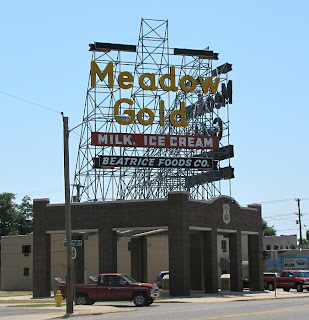 The new at 11th and Quaker

US Route 66 is the historic highway that ran from Chicago through Tulsa and on west to terminate in Los Angeles, California. It is known as "The Mother Road". During the Great Depression nearly 15% of the population of Oklahoma migrated west to Arizona and California on Route 66 looking for employment.

Route 66 went through Tulsa on 11th Street just south of the downtown area, and there is a lot of history there. In 1934 Beatrice Foods put up a large neon sign advertising Meadow Gold milk. It was a landmark at 11th and Lewis for decades. Over the years Meadow Gold went out of business and the sign fell into disrepair and went dark some time in the 1970s. In 2004 the owner of the building on which the sign was installed wanted to tear down the building and the Meadow Gold sign was endangered. The Tulsa Foundation for Architecture led a campaign to save the old sign and it was carefully dismantled. A few months ago it reappeared on the corner of 11th and Quaker on top of a brick pavilion on a parcel of land donated by the city of Tulsa. A landmark restored.

The "Route 66 News" blog has a nice article about the dedication back in May and some fine pictures showing it lit up at night. See it HERE.
Posted by Unknown at 7:17 PM