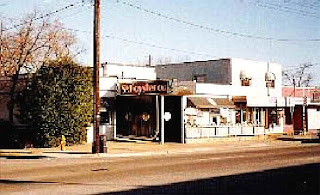 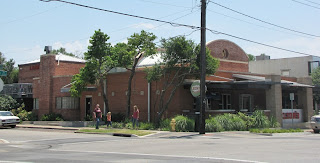 What was the S&J Oyster Bar is now Leon's 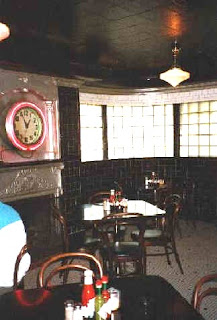 The old S&J Oyster Bar featured a lot of black and white tile, on the floor and on the wall. 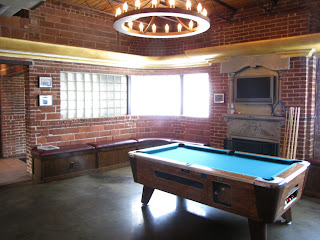 The tile has been replaced with red brick and varnished concrete floors. 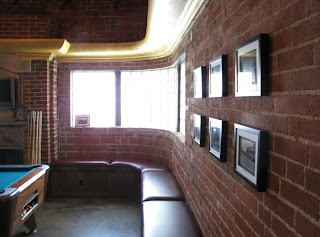 The curved glass block windows go back to the original Streamlined Art Deco origins. The north side dining area is now a game room. 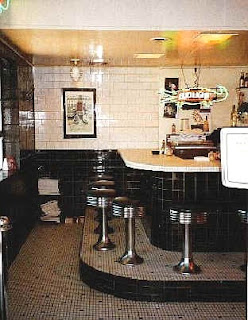 This is what I remember from the S&J, a lot of chrome and black and white tile. 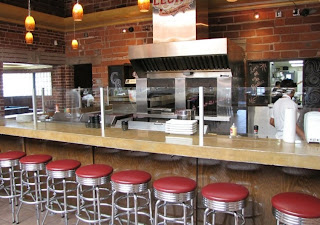 Quite a different look now. 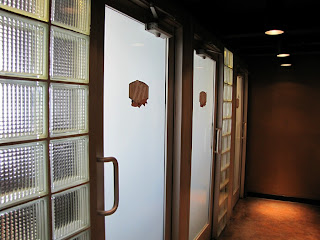 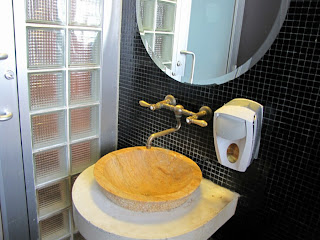 Wash room walls and floors are still tile. This could use a good scrub and some polish on the brass fixtures. 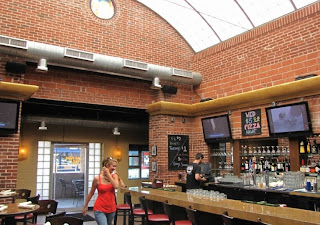 The main bar area is open and spacious. The sky lights fill the room with soft light. 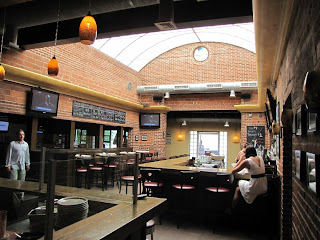 In 1945 the Town and Country Restaurant opened in this building built at 3301 South Peoria Avenue in a Streamlined Art Deco Style. Other than this simple fact, I was unable to find any other mention of the original restaurant. I know that the S&J Oyster Bar was here for a number of years followed by En Fuegos and then Ford's Filling Station, but have not been able to learn its earlier history. A few days ago my wife Susan and I ate lunch at Leon's which is currently located in this building.

In 1983 the building was remodeled by Howard and Sandy Smith and opened as the S&J Oyster Bar. The decor featured a lot of black and white tile and chrome rails. The restaurant's hard surfaces of black and white wall tiles resulted in a high noise levels during busy times which gave the place a lively feel. This proved to be a very successful restaurant and Smith opened a second location in 1984 and a third in Kansas CIty in 1985. The S&J did business in this location until it was sold to Greg Hughes in 2002.

Greg Hughes did a lot of remodeling, replacing the black and white tile motif with exposed red brick. The original flat roof over the front bar area was replaced with a high curved sky light which gave the place a more spacious open feeling. In December 2002 it opened as En Fuego which was an upscale Mexican restaurant.

In early 2005 Hughes teamed up with Benjamin Ford who was Hughes' fraternity brother at USC in California. Besides being the son of actor Harrison Ford, Ben had made a name for himself as chef in noted west coast restaurants. Their joint effort opened in June 2005 as Ford's Filling Station.

J. J. Lewis worked for Greg Hughes when En Fuegos was just starting and ended up managing several enterprises for Hughes. In the summer of 2008 he leased the location and started his own restaurant and bar, Leon's, which he describes as an upscale casual restaurant and sport's bar. In its present incarnation the restaurant at 3301 S. Peoria is very attractive and probably headed for success. My only question is, who the heck is Leon?
Posted by Unknown at 6:04 PM