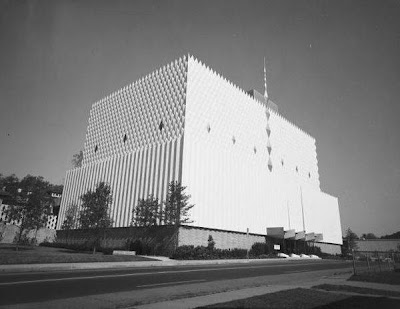 The Abundant Life Building was built in 1957 to house the Oral Roberts Ministries. It is very striking in its appearance because it has no windows. To make sense of the building requires at least a brief understanding of Oral Roberts.

Oral Roberts is an pentecostal minister and faith healer. He started his ministry as a pastor in the Pentecostal Holiness Church. He came to believe he had a special gift for spiritual healing. In April 1947, he began holding healing services in his church on Sunday afternoons. His reputation as a faith healer spread quickly and by May, the crowds were so large that he had to rent larger facilities. In June, he announced to his congregation that he had received invitations to conduct healing services in eight states and had decided to resign his pastorate. In 1949, he began a series of radio programs. By 1950, he was traveling the country with an 18,000-seat tent simultaneous broadcast on 63 stations. Within two years, his radio and television programs were being broadcast on 400 stations in the United States, Canada, Alaska and by short-wave to listeners around the world.

At the time the Abundant Life building was built Oral Roberts was raising literally millions of dollars through his traveling tent meetings and from radio and television solicitations. The name "Abundant Life" is a reference to the passage from the Gospel of John 10:10, "... I am come that they might have life, and that they might have it more abundantly". This and other scriptural references are the basis of what is called "the gospel of prosperity" His life and ministry have been the subject of considerable controversy. He is regarded by some as a prophet and by others a fraud. Nevertheless, he and his ministry have prospered.

The Abundant Life building was the headquarters of this ministry and contained a large television sound stage which could simulate the tent meeting and film the opening and closing segments of the weekly broadcasts. This was also the destination for the large donations which supported the ministry. Much of this money was sent in the form of cash donations and the security considerations of handling and accounting for this money were implemented within this building.

The scale of donations provided for the establishment of a a Christian university which Roberts named for himself. In 1964 Oral Roberts University was opened on South Lewis. By the mid-70s the activities of the Abundant Life Building were transferred to the university and the original building was closed.

Southwestern Bell telephone used it for a time then but since the early 1980s it has been empty. It has changed hands several times but attempts to convert it into a multi-use facility have not gone anywhere. It remains empty at this time. For more on this see this post in Lost Tulsa. 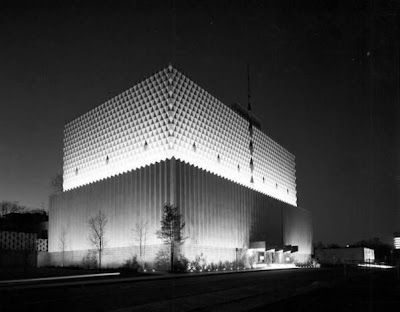 The windowless facade looked very striking when illuminated at night. 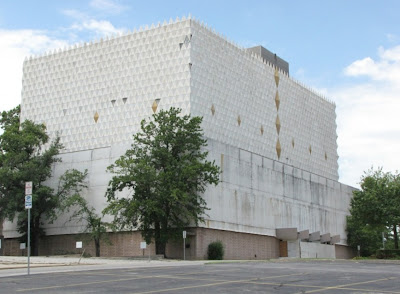 This photo taken in July 2009 shows it looking rather shabby with several missing exterior tiles. I know of no one who has seen the inside. It is something of a mystery.

A fairly concise biography of Oral Roberts and his ministry is HERE.
A Wikipedia article on Roberts is HERE.
Posted by Unknown at 2:55 PM