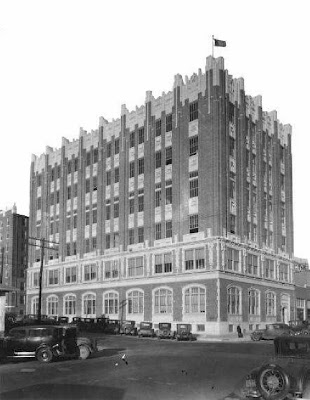 The first two floors of this well-maintained building were built in 1924 when the Gothic Style was popular. They were erected to house the new telephone dial equipment which was first used in Tulsa in November of 1924. 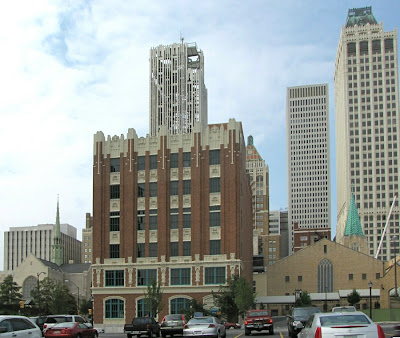 Six years later, in 1930, when Zigzag Art Deco had supplanted the Gothic style, a four story addition was made. The addition held the division offices and the toll terminal equipment for the Oklahoma City-Tulsa underground cable. 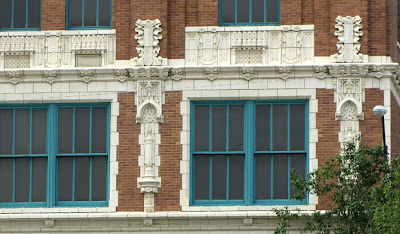 The facade of the first floor of this light brown brick building is broken by a series of large, arched windows. These windows are framed in terra cotta, matching the color of the rather narrow terra cotta quoins and foundation of the building. The second floor windows are rectangular and separated by brick panels decorated with ornate terra cotta torches. A vertical pair of terra cotta shields is located above the torches. Above the second floor the building facade is broken into a series of stepped-back panels terminating in pinnacles above the roof line. The windows appear to be recessed panels. The spandrel area, constructed of buff-colored terra cotta tile with art deco designs, has strong vertical lines. The pinnacles are also faced with terra cotta tile, as is all of the building’s ornamentation. Northwestern Terra Cotta Tile Company of Chicago, the leading manufacturer of these tiles, was the supplier. (Excerpted from Tulsa Preservation Commission)

PS. I added some information to the previous post Cherry Street at Peoria
Posted by Unknown at 12:45 AM