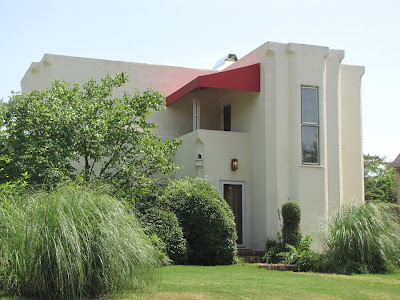 1119 South Owasso Avenue
View of the front on the west side.

Teacher and designer Adah Robinson, with the help of her student Bruce Goff and Joseph Koberling, built her house and studio facing Tracy Park. This hollow tile and stucco Art Deco house has leaded glass windows, terrazzo floors and contemporary spaces decades ahead of its time. The two-story living room has an open balcony running the length of the room and a sunken conversation pit with a fireplace. The home was originally designed by Goff with only a two-burner kitchenette unit at the end of the dinning room. When this was discovered by Robinson, she insisted that Koberling build a kitchen. A small kitchen was inserted into a north corner of the house without disturbing the rest of the plan.
(Excerpted from the Tulsa Preservation Commission) 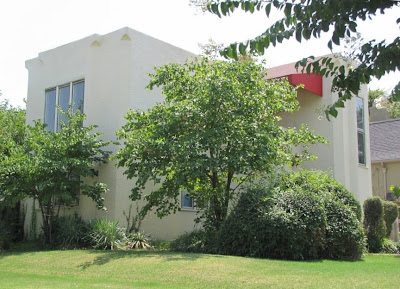 View of the north side. 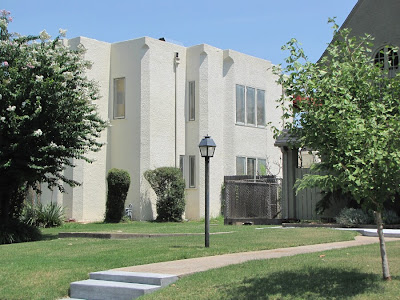 View of the south side. 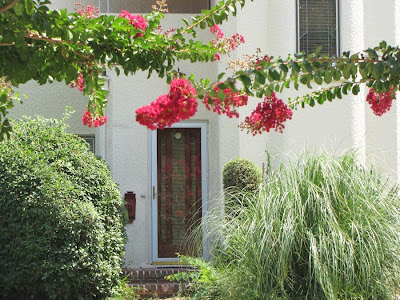 View of the front entrance.

Adah Matilda Robinson was a painter, printmaker, and art teacher in Tulsa art circles for three decades. Born July 13, 1882, in Richmond, Indiana, to Francis Wills and Catherine Robinson, she studied at Earlham College, at the Chicago Art Institute, and with Charles Hawthorne, George Elmer Browne, and John Carlson. In 1905 her family moved to Oklahoma City, where she taught art privately, then briefly at Epworth University, and afterward in the public schools. In 1916 or 1917 she moved to Tulsa to teach her specialty at Central High School and then privately. She founded the University of Tulsa Department of Art in 1928 and thereafter served as its chair. There she was instrumental in founding Alpha Rho Tau art fraternity, and she helped establish the Tulsa Art Association.

During Robinson's career, in addition to painting and printmaking, she articulated the intellectual concepts that guided the overall design of Tulsa's Boston Avenue Methodist Church, now a National Historic Landmark, and she is widely credited with responsibility for the elaborate decoration of the interior. She also redesigned the interiors of Tulsa's First and Second Churches of Christ, Scientist, when those buildings were renovated in 1935 and 1950, respectively. Adah Robinson died in Tulsa on March 10, 1962. (Excerpted from Oklahoma State digital library)
Posted by Unknown at 12:58 PM