The Tulsa County Free Fair began in 1903 at the Western Association baseball park at Archer and Boston. With enactment of the Oklahoma Free Fair Act in 1915, a 15-acre tract of land north of Archer and Lewis was purchased to provide more suitable grounds. In 1923, thanks to a land donation from M.E. Crosbie, the fair was moved to a portion of the present Expo Square between 15th and 21st Streets. Passage of a major bond issue of $500,000 provided for the construction of the Fairgrounds Pavilion in 1931. The fair board acquired land adjacent to the gift acreage in later years, and the "state fair" was born.

The International Petroleum Exposition (IPE) was established in 1923 to exhibit the latest oil industry technology and provide a venue for oilmen to purchase up-to-date equipment, while educating workers and the general public. Tulsa, Oklahoma, was chosen as its home, and the first show, called the "International Petroleum Exposition and Congress," was held there on October 8-14, 1923. Tulsa was proudly calling itself "The Oil Capital of the World".

With the exception of 1926, the IPE was held annually from 1923 through 1930 for a week to ten days during October and grew in attendance from a few thousand to over 120,000. Poor economic conditions in the 1930s caused the show to be held less frequently. After 1940, World War II caused activities to be suspended until 1948.

In 1948, when the exposition opened for the first time since the beginning of World War II, it attracted more than three hundred thousand visitors. The exposition's board of directors voted to hold it every five years in a number of buildings on twenty-plus acres at the fair grounds. During the 1950s and 1960s the venue continued to draw in excess of three hundred thousand visitors. If this world class event was to have a suitable venue one would have to be constructed. 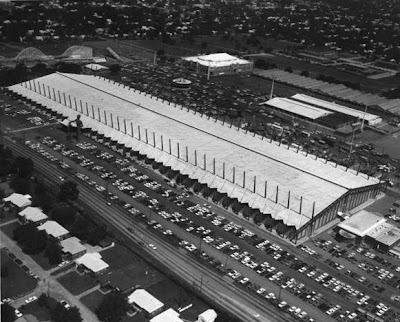 In 1966 a $3.5 million bond issue was passed and all the old IPE buildings were demolished and a ten-acre Exposition Center was constructed. The center provided 354,000 square feet (32,900 m2) of column-free space under a cable-suspended roof. The building spans 448,400 total square feet on two levels, connected by side ramps and stairs, allowing for a variety of show floor plans.The Expo Center became home to the International Petroleum Exposition.

The 1966 IPE housed in the new facility attracted the largest attendance in the history of the IPE. The future of the International Petroleum Exposition seemed assured. But in the early 1970s the oil slump struck. That, combined with competition from the Offshore Technology Conference in Houston, Texas, caused the IPE to lose money in both 1976 and 1979. After a dismal attendance of twenty-six thousand people in 1979, the fifty-seven-year-old International Petroleum Exposition was canceled for all time.

Over the years the Expo Center has hosted a great variety of shows and events. In my memory it has been used for auto shows, boat shows, home and garden shows. powwows, midgit auto racing, rodeos, tractor pulls, gun shows, anything that needs a large open area. 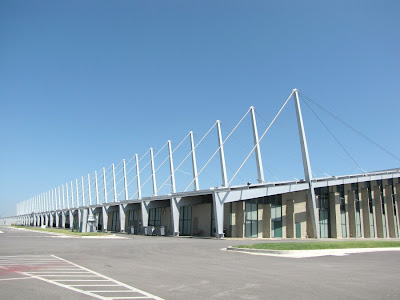 Standing in front of the Expo Center the Mid-Continent Supply Company placed the eight-story-tall Golden Driller statue which was added as a symbol of the International Petroleum Exposition. Weighing 43,500 pounds and standing 76 feet (23 m) tall, the Golden Driller has become the symbol of Expo Square and a Tulsa landmark 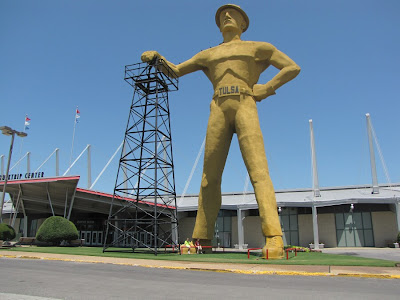 The Golden Driller has it own interesting history. The Mid-Continent Supply Company of Fort Worth first introduced the Golden Driller in 1953 at the International Petroleum Exposition. It was temporarily erected again for the 1959 show and attracted so much attention that the company had it rehabilitated and donated it to the Tulsa County Fairgrounds Trust Authority. It was permanently installed at the 21st Street and Pittsburg Avenue site for the 1966 International Petroleum Exposition. His right hand rests on an old production oil derrick moved from an oil field in Seminole, Oklahoma.

The Driller has been ravaged by weather, survived tornadoes, photo sessions with tourists, attacked by vandals, assaulted by souvenir seekers, shotgun blasts, and has even had an arrow in the back. Art critics have even ridiculed the poor old man.

The basic angle-iron structure made of plaster and concrete will withstand 200 mile-an-hour winds. It was refurbished and painted gold by Gibco, Inc. Tulsa, Oklahoma, in time for the International Petroleum Exposition of 1979. Since then the Golden Driller has guarded the main entrance of the Exposition Center where various trade shows, conventions and consumer events are held. He has collected a host of friends, not only in Tulsa, but also from around the world. 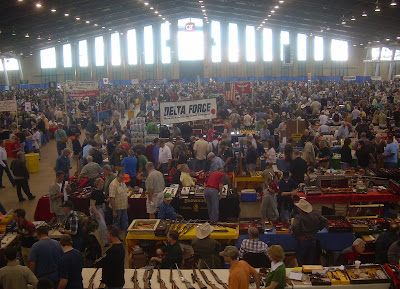 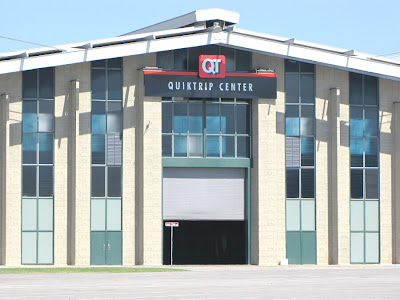 Recently the local QuikTrip Corporation has joined in a 10-year, $2.6 million naming rights agreement with the fairgrounds. For the duration of the agreement it will be known as the QuikTrip Center.

This is but part of the work going into improving the functionality and flexibility of the Tulsa Fairgrounds, now more correctly known as Expo Square. The QuikTrip Center is considerably refreshed, the Pavilion has enjoyed a complete remodeling, New livestock show barns have replaced the outdated barns and sheds with help from the Ford Motor Company. Tulsa should be well served by Expo Square far out into the future.